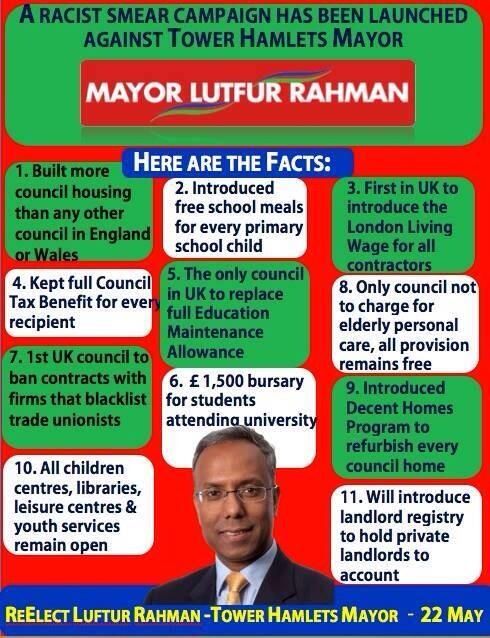 I’ve been marvelling at last week’s Guardian article by Richard Seymour and Ashok Kumar defending Lutfur Rahman, the extremist-linked mayor of Tower Hamlets. Ashok is the man who celebrated Rahman’s election victory under the headline: “The last outpost of the Raj falls.” There are also interesting things online about Richard which open, shall we say, new windows into his views on racism. With friends like these, etc, etc.

Even by the standards of the Guardian’s reporting of Tower Hamlets – most unlikely to win another Pulitzer! – this is an amazingly dishonest piece. Its 950 words contain by my count at least 18 separate falsehoods, many of them copied directly from council press releases and Rahman leaflets (see above.)

It’s worth going through the claims from the leaflet (and – where different – the article) to deconstruct some of the things we’ll be hearing endlessly from Rahman and his defenders in the weeks ahead. “Judge me by my record,” he keeps saying. Not, presumably, his and his supporters’ cronyism, favouritism, links with extremism, bullying, intimidation, unscrupulousness and general political sleaze but his many alleged policy accomplishments to help the people of Tower Hamlets.

Even some of his opponents half-buy the line that Rahman’s success is due as much to his populist policies as to vote-buying, ethnic bloc favouritism and so on. See what you think once you’ve read this.

Claim: A racist smear campaign has been launched against Rahman.

Reality: This is presumably a reference to my and other people’s reporting. In fact Rahman and his supporters have lost countless complaints to the PCC and Ofcom about my reporting, which has been upheld on every substantive point. In particular, the PCC ruled that it was not inaccurate to describe Rahman as extremist-linked.

The claim of racism is the standard charge made by Rahman against all who question him. But a majority of my sources, including three of those quoted in my latest article, are themselves Bangladeshi.

Claim: Tower Hamlets has “built more council housing than any other council in England or Wales.”

Reality: Tower Hamlets did not build a single new council home last year, according to DCLG figures. Nearly all new social housing in England is built not by councils, but by private developers as part of bigger schemes or by housing associations. Nearly all public funding for newbuild social housing comes not from councils but from Whitehall (or, in London, the Mayor of London.)

Reality: Decent Homes is a national programme introduced by the last Government in 2000, two years before Rahman even became a councillor and ten years before he became mayor. It is also paid for by the Government – though that hasn’t stopped Rahman sending thousands of publicly-funded direct mail letters to council tenants, claiming the credit.

Claim: Tower Hamlets is the “only council in the UK to replace the full Educational Maintenance Allowance.”

Reality: Only 400 bursaries were available – although 800 students from the borough start university each year – and even these were a one-off, given only to students starting in the 2013/14 academic year (p4 of this PDF).

Reality: Free school meals have in fact only been introduced in two of the seven primary years – reception and Year 1.

Free school meals will be introduced for the other primary years only in September. The cost for the the three infant years will actually be met by the Government under its new national scheme, not by the council. The free meals for junior school children (years 3-6) will be funded by the council, but only for twelve months. It is not clear what happens after that.

Reality: This actually applies only to “most” recipients, according to the council website. And even that is only guaranteed until April 2015, after which it will be “reviewed on an annual basis taking into account the needs of residents, the cost of provision and the funding available.”

Claim: Tower Hamlets was the “first in the UK to introduce the London Living Wage for all contractors.”

Claim: Tower Hamlets is the “only council not to charge for elderly personal care. All provision remains free.”

Reality: Untrue – 32 other UK councils do not charge for elderly personal care.

Reality: Untrue. In youth services, Tower Hamlets has cut its budget by 65 per cent – double the national average. It is one of only 12 authorities in England to receive an official Government warning about its failure to track young people not in education, employment or training (NEETs).

Children’s centres were restructured in 2011 and the service offered from fewer main sites. According to a quarter-on-quarter comparison by the council’s scrutiny committee, the restructuring resulted in 153 fewer classes, 715 fewer hours’ service provided and 3,372 fewer children using the service.

Claim: Tower Hamlets was the “first council to ban contracts with firms that blacklist trade unionists.”

Reality: The ban in fact applies only to construction firms which blacklist trade unionists. Tower Hamlets was not the first council to ban such contracts – Hull, for instance, acted sooner. The ban appears to have only symbolic effect because the companies involved in the blacklisting say they have stopped doing it.

Claim: An investigation following allegations by the BBC’s Panorama “turned up no credible evidence of wrongdoing.”

Reality: Both a police investigation and a separate Government investigation remain ongoing. See my earlier blogpost for an account of the wholly misleading statement issued (and later corrected) by the Met on this issue.

Claim: The Electoral Commission found “insufficient evidence to prove an offence” of voting fraud in 2012.

Reality: As my detailed post on the issue describes, many of the allegations of fraud were investigated and dismissed not by the Electoral Commission or by the police, but by Tower Hamlets Council – in other words, by people working for Lutfur Rahman. Where the police did investigate, they found “evidence to suggest that offences may have been committed” for at least five – possibly more – allegations. However, their investigation was desultory and made little effort to gather sufficient evidence for prosecution.

• Get the latest comment and analysis from the Telegraph

I am senior correspondent for The Sunday Times, previously at the Telegraph, the London Evening Standard, and the BBC's Today programme. I'm a winner or nominee of various awards, including the Paul Foot Award, the Orwell Prize, Amnesty International Media Awards, British Journalism Awards and Foreign Correspondent of the Year and Journalist of the Year at the British Press Awards (winner 2008, nominee 2015).

I'm also head of the Capital City Foundation at Policy Exchange and a former cycling commissioner for London. This is my personal blog.

This site includes archived posts published on my Telegraph blog between 2009 and 2014. The paper has now closed all its blogsites, so links in the posts to Telegraph blogs (including my own) don't work - but you can find anything of mine by using the search box below.